What do you do when intuition tells you one thing, but the system tells you another?

Case in point: My fiancee loves Minecraft. To the point she has to play the Xbox Insider version to get all the latest features and has a set of valued streamers she follows.

So, she plays Minecraft on our Xbox One X and creates her best world yet.

Problem: She's a PC-kind-of-a-woman; her Overwatch-trained reflexes and hand-eye-coordination feels sluggish on a console controller. So, once she's created her (thus far) most detailed and enjoyable Minecraft-world, she wants to move over to her PC because: Ta-da! Minecraft Windows 10 edition is cross platform.

Wrong! Minecraft worlds aren't part of any cross device synchronization. The only solution (it seems; bash me if I am wrong) is to sign up for Minecraft Realms and upload your world and then download it again on your other device.

This only works if you are running the stable release. Not the insider super-beta alpha-preview almost-there release.

And I get it - you want that unstable release because it has all the more possibilities when creating your world. You want options - not limits.

So, frustration ensues. It builds. Rage follows close behind. Microsoft is horrible and everything that is wrong with the world!

Now, as a developer, I encounter this almost daily. You work with something that only takes you so far, but then it stops and tells you "You shall not pass!".

What do we do? Mostly, we do exactly the same thing:

This is where creativity and experience kicks in. Banishing yourself to helplessness and frustration doesn't lead you anywhere. The framework, game, the world itself does not budge. But it has its set boundaries and rules.

These things can be circumvented, worked around, turned against themselves.

Multiplayer is a part of the rules of the game - it accepts it. And in the world of cross platform, it also accepts players from other platforms.

So, what happens if my fiancee starts her favourite game on the Xbox and enables multiplayer?

She can join her own game from the PC - she actually shows up as a friend of herself; go figure.

And there she is - playing her own game with herself.

Because all items can be transferred into chests and whatnot, nothing is lost except experience levels - which can easily be earned back. 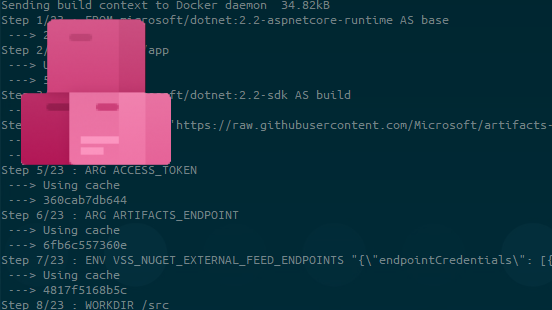 Problem: When running tasks like dotnet restore inside a Docker multi-stage build, it will fail if nuget.config refers to a Azure Artifacts feed due to 401 - Unauthorized. If